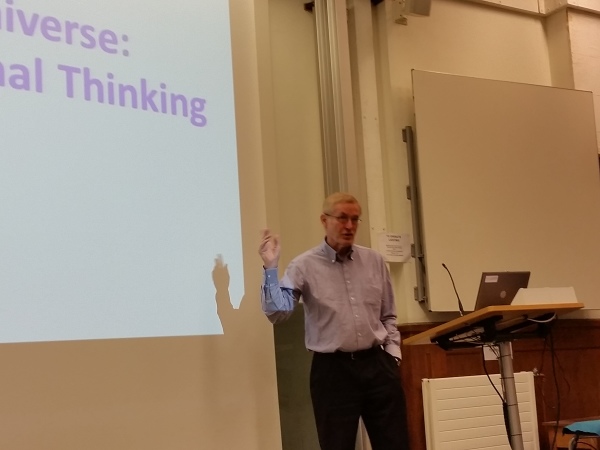 In this one-hour talk, Tony Hey (Microsoft Research's former vice president) gave a tour of the Computing Universe how he calls it. I was surprised, that a lot of the early inventions and research work on computers were actually done in Cambridge, which I will summarise here (I added some links and pieces which I researched, inspired by Tony's talk).
Tony Hey talks about "The Cambridge Connection". Max Neumann (St John’s College) lectured Alan Turing on "The foundation of Mathematics" in 1935. He asked whether there was a 'mechanical process' which could be applied to a mathematical statement to answer whether or not it was provable (Entscheidungsproblem). Turing showed that the answer was 'No' with his Turing machine and he proved the "Halting problem": there is no way to tell whether the execution of a program will terminate.
Turing became acquainted with John von Neumann while von Neumann was a visiting professor at Cambridge in 1935, and also during Turing's PhD year at the Institute for Advanced Study in Princeton, New Jersey during 1936 – 37.
He continued with John von Neumann (who developed the von Neumann architecture which defines the basis architecture for a computer which is still used today) and the EDVAC (Electronic Discrete Variable Arithmetic Computer) in 1945, which was developed in Cambridge before the ENIAC (which is often cited as the first computer). The ENIAC was programmed by six women, they were inducted into the Women in Technology International Hall of Fame only in 1997.
Four more electronic stored-program computers become operational: EDSAC (Electronic Delay Storage Automatic Calculator) at the University of Cambridge 1949, followed by BINAC (Binary Automatic Computer) in the U.S., the CSIR Mark I (Council for Scientific and Industrial Research Mark I Computer) in Australia, and Whirlwind I in the U.S.
The first AI programs to incorporate learning, written by Anthony Oettinger at the University of Cambridge (Clare College), ran in 1951.
see also:
Computer for a Tea Shop chain
"The top management of Lyons, with its background in the use of mechanical adding machines, saw the necessity of new electrical computers for organising the distribution of cakes and other highly perishable goods. They, therefore, substantially financed the University of Cambridge's Electronic Delay Storage Automatic Calculator (EDSAC) which was the first electronic digital stored-program computer to go into regular service, and built their own programmable digital computers and became the first user of these in businesses, with the LEO I digital computer: the Lyons Electronic Office I, designed and built by Dr John Pinkerton under the able leadership of John Simmons. It handled the company's accounts and logistics. Lyons also included the weather forecast to ensure goods carried by their "fresh produce" delivery vans were not wasted in large quantities. Google chairman Eric Schmidt called this "the world's first office computer", built in 1951.
"David Wheeler was one of the generation of mathematicians and engineers who were drawn to the newly emerging discipline of computer science in the period immediately after the Second World War. As a member of the team working with Maurice Wilkes on Cambridge's Edsac (Electronic Delay Storage Automatic Computer), he was responsible for the system that provided instructions to the computer, and the innovations he made at the time still form the basis of modern computer programming."
http://www.computer.org/web/awards/pioneer-david-wheeler
Wheeler (Trinity College) worked on the EDSAC, developed the first "assembly language". Wheeler (student of Wilkes) received the first doctorate awarded by the lab in 1951.
http://en.wikipedia.org/wiki/Maurice_Wilkes St John's College, Cambridge from 1931–34. In 1945, Wilkes was appointed as the second director of the University of Cambridge Mathematical Laboratory (later known as the Computer Laboratory). Maurice Wilkes receiving his knighthood in 2000 from Her Majesty, The Queen.
Computer Laboratory Cambridge
http://en.wikipedia.org/wiki/Computer_Laboratory,_University_of_Cambridge
The Cambridge Diploma in Computer Science, which ran from 1953 to 2008, was the world's first taught course in computing. Undergraduate teaching was introduced in 1970.
The first woman to take up an academic position at the Cambridge University Computer Laboratory, Jean Bacon was appointed to a University Lectureship in 1985.
First web cam 1993 in the Computer Lab http://en.wikipedia.org/wiki/Trojan_Room_coffee_pot
First computer game OXO (Tic-tac-toe) in 1952 for the EDSAC http://en.wikipedia.org/wiki/OXO
CAMBRIDGE COMPUTING - The First 75 Years, Haroon Ahmed 2013
http://www.cl.cam.ac.uk/downloads/books/CambridgeComputing_Ahmed.pdf
More Material
Ian Sample talks to Tony Hey about The Computing Universe, his book with Gyuri Papay charting the evolution of computers from Babbage, Lovelace and Turing, throwing forward to the potential of AI and computational thinking.
Tony Hey is a prolific writer and academic who spent the first part of his career working in particle physics, before switching to computer science. Until last year he was Microsoft Research's vice president, responsible for the company's worldwide university research collaborations.
The author of The Computing Universe discusses topics from Moore's Law to Stuxnet, Asimov to Space Invaders, and everything in between.
Podcast (33 min)
comments powered by Disqus